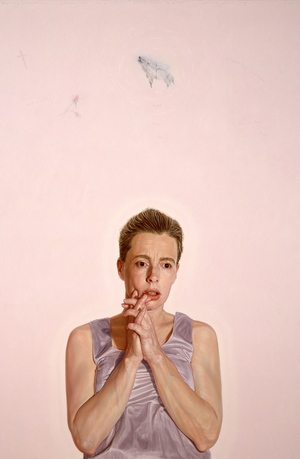 Santa Fe New Mexican: Pasatiempo
State of the art: A representative survey of local artists on view at the Roundhouse
Michael Abatemarco January 24, 2020

Maybe you’re a lawmaker or a lobbyist, tracking a bill as it makes its way through the House and Senate toward an uncertain fate. Maybe you’re an out-of-town visitor, checking off the “Roundhouse,” as the New Mexico State Capitol building is informally known, from your bucket list. Whatever the reason for being there during the legislative session, there’s plenty to see beyond government in action. Boasting nearly 500 artworks by New Mexico artists, the New Mexico Capitol Art Collection rivals the permanent collections on view at any of the local museums.
The sampling of exceptional works that follows reflects the eclecticism and dynamism of the Capitol Art Collection and the singular talents of New Mexico’s many artists. The works range from the traditional to the contemporary, in a wide variety of mediums. You could easily make a day of it and still not see it all.
Diane Marsh
Prayer (1993), oil on canvas, 78 x 58 in. (On the 2nd floor, west lobby)
Originally based in New York City, figurative painter Diane Marsh spent a year in New Mexico when she was invited to participate in the coveted Roswell Artist-in-Residence Program in 1980. She returned to New Mexico in 1986 and spent 10 years in Santa Fe before settling on a ranch in the southeastern part of the state. She was among the first round of artists featured in the New Mexico Museum of Art’s rotating exhibition Alcoves 2020 in the fall. She paints enigmatic, narrative imagery, often of people engaged in moments of contemplation, a tender embrace, or tearful sorrow. Surreal elements like animal forms and human faces float above or surround the central figures, who are often based on Marsh, her family members, and friends. The viewer has the impression that her subjects reflect on, or mourn for, these disembodied or free-floating forms, as though she’s making visible that which resides in their hearts and minds. Marsh’s work, crafted in varying degrees of hyperrealism, is elegiac and empathetic, expressing a sense of selflessness, devotion, and love.
In Prayer, the faint form of a howling wolf (or other canine) floats high above a portrait of a woman, her hands clasped together in supplication. Is it for the wolf-dog she prays? Her eyes, masterfully rendered, appear to gaze at nothing external. They’re open, but she’s looking within. For the viewer, the story behind Prayer is open-ended, but Marsh’s ability to capture a sense of the inner life of her subject makes it relatable. ◀